Yes, I know; I'm a very naughty blogger.  The Koala will have my toenails yet, I fear.

I don't want to turn this into an edited blog of collect and repost, but I have some things I want to share.  I really love the idea of recycled materials used for building and furnishing, especially when the character has been left intact.  So here's a collection of stuff that pushes my happy buttons.

And then there's these:

taken from inspirationgreen.com, which is one of the most amazing virtual places I've ever been.  I can't tell you how excited it makes me when people go to the trouble to create something beautiful, especially out of things that have been thrown away.

So here's the thing; I have a enormous collection of blue Prosecco bottles.  How would this

do for a writing shed, do you think?  Think I'd get it past the building inspector here in Switzerland?
Posted by Mother (Re)produces. at 2:26 PM 7 comments:

On the writing front, I intend to be back with pencils and a vengeance in January, and in the meantime, Echo Ink Review has a story of mine ("Ink") in their December issue.  Click on the link, scroll down slightly (look for the oyster) and then squint as you try to make out my name on the cover.  They claim it's available at Amazon, but I haven't seen it there.  Check your local library, if you're curious and have time during the holidays?  Do libraries even still stock short fiction publications?

Have a good rest, Bloglodytes!
Posted by Mother (Re)produces. at 5:16 PM 2 comments:

Oh, man.
Everytime I go away for a bit, Google "improves" blogger.  If I could program (and I can't, so you're safe, Bloglodytes) I would launch a series of platforms with the motto "We won't change unless you make us."  I would have "Blogosaur" for people to write their blogs on and it would never change.  And "NOFACELIFTBOOK"  which would also never change.

So.  Enough of my technophobe whinging; how are you, Bloglodytes?  I've been on holiday, rain, sun, wind.  The usual mix in west Cork.
Actually, I came here today to complain about something else.  I've joked elsewhere about the quirks of (mis)translation.  While roaming around some online bookstores the other day, I found some English books with inexplicably translated titles in German.  I don't know if this happens in other languages, but it is a rampant illness in German, which drives a lot of Germans batshit, I know.  I was reminded of a comment I ran across in a local TV guide about a mediocre TV movie.  I can't remember the original title of the film in English (*found it!  It was called Woman Undone!*), but the German title was Gnadenschuss im Flammenmeer.  The basic plot was that a man was found burnt in a crashed car with a single gun shot wound to the head.  His wife, whose fingerprints were all over the gun, powder burns on her hands, and who had also been in the crash, had no memory of the incident but was put on trial for murder (or something like that).  She loved her husband and could not believe the evidence.  At the end of the film, we find out that he had been trapped in the car, burning alive (she had presumably been thrown clear).  With no way to free him, she shot him so he wouldn't suffer.  The reviewer commented that the film was very bad, and that the one -perhaps- redeeming quality, that little bit of suspense,  was annihilated by the crappy German translation of the title.  Gnadenschuss im Flammenmeer,  means 'mercy-shot in a sea of flames.' Gee, I wonder why she did it?  (Check out the Den of Geek for a more extensive list, including Man With Beard's personal favorite, the inaptly named Schlappe Bullen beissen nicht (Floppy cops don't bite, AKA Dragnet)).

So, the book titles I ran across:

Norton Juster's The Phantom Tollbooth has been swapped for the nondescript Milos ganz und gar unmögliche Reise, or 'Milo's completely and absolutely impossible trip.'  Zzzzzzzzzzzzzzz... You could swap out the name 'Milo' and use the same title for the Narnia Books, or The Hobbit, or even Neverwhere...  The Incredible Journey... My last trip to the post office with the opening times from hell...

For some inexplicable reason, Mark Haddon's The Curious Incident of the Dog In the Night-time has been "translated" as Supergute Tage oder Die sonderbare Welt des Christopher Boone.  'Super-good days, or the peculiar world of Christopher Boone.'

Some are down-right boring.  An Abundance of Katherines was translated as Die erste Liebe (nach 19 vergeblichen Versuchen).  'First love (after 19 unsuccessful attempts.)'  What's wrong with Ein Reichtum von Katherines?  John Green, if no one bought the German language version of your book, you now know why.


Linda Urban's A Crooked Kind of Perfect has become
Das Leben ist kein Klavier, or 'life is not a piano'.
Thanks for that, and here I was trying to get myself tuned.


I know not all things can be translated, and I realise that publishers need to sell according to their markets, but I don't think that's the problem here.  I think it's a bad case of the people who make up the titles in Germany completely underestimating the abilities of their viewer/readership.  They project their lack of imagination and creativity on the public.  And change- not translate- titles that don't need to be changed.

Any film that hits German TV in which a woman (or man, or police officer, or whatever) does, well, pretty much anything  *other* than roll over and take it will be given the title 'FILL IN THE BLANK- A Woman (Man, Police Officer, Enraged Daffodil) Strikes Back.'
'Rape- A Woman Strikes Back' (Little White Lies)
'Abuse- A Daughter Strikes Back.'  (Silent Lies)
'Trial- A Cop Strikes Back (Mistrial)
'Soggy Cereal- A Comic Strip Character Strikes Back.'  (Made That One Up But You Get The Point.)
They do this instead of translating the title.
In the case of these films, it's become a sort of shorthand for 'skip this film, it's a crap made-for-TV film.'  You might even call it a public service.  Sometimes they butcher the titles of good films, too, but they are running TV stations and I don't expect better of them.  I live in a fantasy world where book publishers have higher standards than TV people.  When it comes to the books, it seems like the publishers are shooting themselves in the foot by giving the books mediocre titles that are likely to attract the sort of people that wouldn't enjoy them and conversely not attract the ones who would.  But there's also the translation issue; I sincerely hope the books were translated more faithfully than the titles.  It wouldn't instill me with confidence, you know?  If they're that frivolous with the title, what have they done with the rest of the author's carefully chosen words?


Maybe it's time for a film project:
Shitübersetzung- ein Manuskript schlägt zurrück.
'Crap translation- a manuscript strikes back.'
Anybody up for it?

It's August now.  After the coldest summer in the last thirty years, we are now having hot, perfect for bathing weather, now that the kids are back in school.  So cruel.  OTOH, Middlekid is taking a life-saving course until late September, so I'm glad to know she won't be turning blue.

I did aim to post once per month, minimum.  I skipped July.  Did anybody notice?  I hope not.  I hope you were all taking advantage of your breaks and weathers, whatever your hemisphere.  I look forward to catching up on your blogs.

On the writing front, things are going surprisingly well.  I thought it would be harder to get into the rhythm again after taking the whole summer off, but there I was in the shed, scribbling away, brimming with new tortures for my characters.

On the publication front:  The Fucking Fairy Story (some of you may even know what I'm talking about) has been shortlisted somewhere for almost a year.  Beads of sweat, bloglodytes, beads of sweat!
And- here's where it gets a bit weird: I've had a short, flashy tidbit accepted somewhere else.  Now, this somewhere else is new, but I liked the look of their e-zine, and I liked the name, so I sent them something- no money, but so what?  They had technical difficulties, there were delays, etc., so I queried and they wrote back that they wanted it, yes.  Time slithers on, and what do I read on their blog, but that the pdf issue has gone out to all subscribers nearly a week ago.  I just kind of assumed since I was in the magazine, they would send me a copy or a magic link or something and I wouldn't have to beg for one.  It's mailing list only!  It's not even available on their web-site!  I wanna see!  I wanna see!  And once I've seen that I'm really in it, I'll post a link over their where those sorts of links are so you bloglodytes can see too.  Still, anybody else think this is odd?

Hope you're all writing furiously and happily.  It's nice to be back!
Posted by Mother (Re)produces. at 1:50 PM 8 comments:

I had a dream last night;
Middlekid has a small but tall chest of drawers in her room. In my dream, Peppercorn crawled out from underneath it, and had about eight kittens with her. The reason she disappeared was because she was busy having kittens, not because some wastrel ran over her. Weird, considering we had her fixed in March in real life.

It was a lovely dream, but I don't know where to file it.
Posted by Mother (Re)produces. at 1:01 PM 2 comments:

Of Cats and Assholes 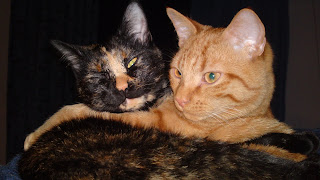 Some miserable, worthless fuck-wad ran over our cat this morning. No one seems to have seen anything, and the coward drove off. Any way you slice it, Peppercorn is gone, gone, gone, and Mandy has to stay locked in the house because he won't stay off the street, sniffing the spot where she was lying. 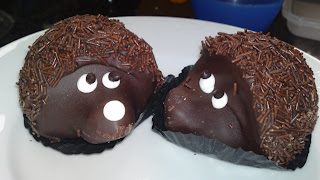 Normally, I don't like eating things with faces, but for a punschkugel, I'll make an exception.

In other news, there is such a big, big difference between the phrase "the novel is in the bag," and "I have bagged the novel." Is there a day in the future when I am sure enough of myself as a writer to start a project I believe in and ram it right on through to the end without waffling, wandering off, being unfaithful? In short, the novel is back on the back burner, yes, again, because I feel like I'm beating my own head in with a brick that would rather be doing something else.
I really do fantasize about a day when I feel as if I have some clue what I'm doing as a writer and I know it may never come. Maybe it doesn't need to? Perhaps this is just the way I do things. Work on something a bit until it stalls. Put it aside and work on something else until that stalls. As long as I don't just play musical manuscripts, I mean, as long as things are getting finished and submitted in their own good time, it's ok, right? Right?
Posted by Mother (Re)produces. at 2:09 PM 6 comments:

Mother (Re)produces.
I am a writer, artist, and mother with the attention span of a two year old. Also, if stuff annoys me, I tell it.

Fellow Bloglodytes Who Deserve a Donut (and a visit) 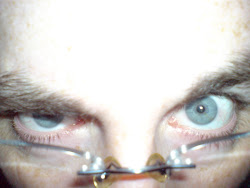